Life is hard. Things we don’t plan for happen to us. Illness strikes us unexpectedly. When things happen, we can choose to fight or sit down and have a pity party. Some decide to wallow in self-pity and they want everyone else to feel sorry for them. They tell the world about how awful things are for them and how there is no help. This only leads to an endless road of hopelessness. Others decide to fight. They stand up to their illness and face it head on. With mental illness and cancer, if you want to reach recovery, you must decide to stand tall and fight. 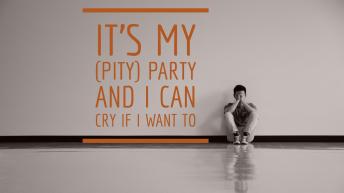 I know a woman who is suffering from mental illness. She tells everyone there is no help for her. She goes to her friends and talks on and on about how awful her life is. She blames her husband for not understanding and changes psychiatrist often when they won’t do what she tells them to do. She doesn’t try anything the psychiatrist suggests, and when medication doesn’t work right away, she stops taking it. Instead of fighting her illness, she has chosen to feel sorry for herself and she wants everyone else to do the same. The only problem is she’ll never reach recovery because she won’t fight for it. The only thing I can do for her is pray she’ll change her ways and decide to fight to reach the light.

A coworker comes up with imaginary illnesses and sees the negative side to everything. If you ask her how she’s doing, she’ll list all her problems and want you to pray for her. Her doctor told her she needed to talk to a therapist, but the therapist suggested something she didn’t like, so she quit. When she is invited to hang out with others at work she has excuses. If I call her on the phone to tell her about something that happened to me, the conversation turns into all about her problems. She’s a single woman who sits alone at home and feels sorry for herself. She’ll never change unless she is willing to work hard and find a new way of thinking. I pray in time she’ll decide to go back to therapy and stick to it. She can live a happy life if she is willing to commit herself to the battle to find joy in life.

When I had mental illness, I could have sat down and had a pity party, but once I realized what my illness was, I decided to fight it. It took time and a lot of work, but I did reach recovery. Now I have cancer. When I found out I had it, my husband told me not to go to work the next day. I wanted to go to work. Why? Because I wasn’t willing to sit around home crying and feeling sorry for myself. I wanted to keep busy and be around people. I wanted to push forward.

It would be easy to wallow in self-pity. I mean, haven’t I been through enough? Last year I had ankle surgery and was in the emergency room four times. I’ve fought mental illness, risen above abuse, and worked around a learning disability. Isn’t that more than enough for one person to face? Now I have to face cancer. It would be so easy to lie in bed and give up.

I could have a pity party, but I’m not like that. I’m a fighter. I will beat cancer no matter what it takes. I’ve been running from one appointment to the next. My head has been over- loaded with so much information, I feel like shutting down and hiding. Instead I push forward. I practice the coping techniques I learned while I was recovering from mental illness. I go to work each day, I put a smile on, and I even joke about my up and coming surgery with friends, saying while they give me new breast, can they take a few inches off the middle and off my bottom?

I’ve had to make some difficult decisions, I have a scary disease and I have a long road ahead of me, but I will not feel sorry for myself. Instead I will stand up and fight. I even told my friends I don’t want anyone to feel sorry for me. If you love me, you’ll support me in my fight.

A coworker told me, “Stop having a pity party.”

I answered, “I don’t have pity parties. I fight.”

I can’t say at times I don’t feel sorry for myself. Who wouldn’t, but I don’t let myself linger in it. Instead I focus on beating cancer and staying positive. I push forward and I prepare for what is to come. I celebrate the small things like I will not have to have chemotherapy.

If you have mental illness, cancer, or some other illness allow yourself to have a small pity party, but then push forward. Don’t give up on yourself. Fight with all that’s in you; fight to get better, fight for yourself, and fight for a new beginning. Pity parties don’t get you anywhere.

I am facing a major surgery to have my breast removed and reconstructed, but I will stand tall. Because I don’t sit in self-pity, instead I fight. In time I will be dancing in the light of recovery from cancer.

4 thoughts on “NO PITY PARTY”